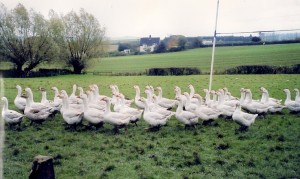 Before the popularity of the turkey goose was the Christmas celebration bird of choice. Easy to rear for anyone who had a piece of land or easily purchased from the many butchers that abounded on our high streets. That’s before freezers made their appearance – both commercial and domestic! Now it’s out on our butchers’ shelves again, albeit sparsely. More of a ‘niche’ buy. Probably because people are wary of cooking it and for a one off piece of meat it doesn’t have the versatility of the turkey when it comes to post Christmas dining……

So this is the brief tale of a local farming family who have a history of rearing – alongside the main farming activities – and supplying our local butchers with the Christmas goose – and what that entails….. It all starts around the end of May. At one time the eggs were hatched on the farm but now it is more practical to buy the goslings at around four days old from a supplier. They purchase around one hundred in number. To begin with they are kept under lamps and artificial light and fed on poultry crumb for four weeks. During this time there is a natural wastage of around 10% – survival of the fittest! Once ‘in feather’ they can be released on to the fields and for seven months they are free to roam. Protection is all important. Predators abound. A watchful eye is kept and the birds come in every night…. At the beginning of December the birds are brought into the sheds, corn fed, and on the 20th they are ready for dispatching. Until recently that was a hands on affair but to make life easier a professional gang is now hired to perform the task as well as the plucking.

An interesting note was that now ‘wet’ plucking makes feather removal ‘cleaner’ but when ‘hand done’ the down from the goose could be retrieved and sold for eiderdowns and pillows. A lucrative by product. My friend made me laugh when she said she was educated on those proceeds! Now her ‘by product’ is goose fat. The fat inside the bird once removed, she renders down and ‘jars’. A local friend makes the labels… Our local butchers market it and we get the benefit of making great roast potatoes…!

So the 20th has arrived and this labour intensive season is coming to an end for another year. The geese are individually dressed and made table ready. Giblets included – so important for that meaty gravy…! All that is left to do is the delivery of the birds to butchers – around Ledbury and Bromyard. I say ‘all’ ‘cos it’s an early morning call for the driver…..

So that’s it folks. My first blog ever and, hopefully, if you enjoyed it, not my last. So go on. Order that goose from Wallers or Gurneys – I’ve ordered mine! A merry Christmas and a happy New Year to one and all.

PS As a footnote from my source – always remember to slice the cooked goose thinly. And another great tip – the unused and usually discarded ‘feathered wing’ from the bird is great for sweeping down the back of the aga or getting in those cobwebby corners!…..she’ll have some to spare…. !