Ask Ant Stevens if his background is in brewing and he smiles, “It’s a long story….” But we are sitting at a small bar in the Ledbury Real Ales brewery just outside the town, got a pint and a half in front of us and time doesn’t seem a problem. What comes through the story of how he and his wife Kate have ended up here brewing delicious ales in their converted garage is a real passion for the stuff, a passion that even led him to buy and run a pub in Croydon – which taught him a lot, he says. With his inside knowledge of the industry plus a degree in Biomedical Science and Microbiology he understands the chemistry as well as the practicalities of good brewing, and of course the extensive research arduously undertaken on his travels round the globe also helps!

The beers themselves all have a lovely bright hoppy bitterness to them, a rather old-fashioned taste that I love. There are three; the classic satisfying Bitter, a lighter Gold with a smooth refreshing taste and a Dark which has an almost Guiness-like intensity but is not heavy at all. They are available at various hostelries in and around Ledbury; the Oak at Staplow, The Feathers, the Green Dragon at Bishops Frome to name but a few. It is also rumoured that Ledbury Real Ales will be the official beer for the Ox Roast in June. 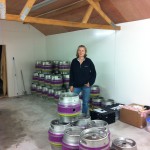 Ant is proud of the fact that his beer is as local as it possibly can be, with hops from Pridewood Farm at Ashperton for the Gold, from Stocks Farm at Suckley for the Dark, with the Bitter using both. Although using local malt is difficult because of the small quantities, the Stevens hope to be able to do this further down the line. And it is good to know that Ledbury Real Ale comes in casks made by Hereford Casks, possibly the last remaining cask maker in the UK.

Ant and Kate have big ambitions for Ledbury Real Ale, but are sensible enough to know that what really matters is the taste and the consistent quality of their brew, and to allow the business side of the enterprise to develop at its own pace. Ant says that at the moment he seems to spend more time cleaning than brewing as cleanliness is absolutely critical to reproducing a consistent taste, particularly at this scale of production. But as with any excellent product, expansion is inevitable, and, driven by local demand, this year will see them going from one barrel production to six, something that many people in and around Ledbury will be very pleased to hear.