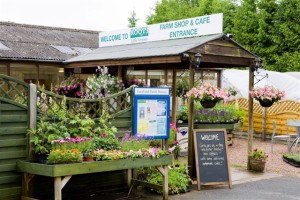 Changes are afoot at Roots, the cafe and farm shop on the Hereford Road just outside Ledbury. Their kitchen has recently been moved and modernised, but more importantly so has their menu! Some old favourites have stayed, but alongside the jacket potatoes and sandwiches are some interesting seasonal soups and specials. I particularly liked the sound of beetroot & orange soup, although cauliflower & gorgonzola served with a pickled pear relish also got the taste buds going. Both are served with their own Orchard Loaf – a light wholemeal made from locally ground organic flour with just a splash of their own apple juice……. Starting to feel hungry?!

Linzy Outtrim, the manager there, says that the new menu was definitely a team effort. Linzy came into the business three years ago “to water the plants” and just sort of stayed. Like others in the team she got interested and involved, learning new skills along the way. It is obvious talking to her and the others that all the staff there are passionate about fresh, local, seasonal produce and can’t help but get involved in all aspects of the business. They love the challenge of dealing with the occasional glut of fruit or vegetables that come from the organic farm over in Rushwick, keeping the buying in of non-seasonal produce to a minimum. Recognising that for a lot of food outlets the vegetarian option is often an afterthought, Roots has made a deliberate effort to turn that around. While they do offer meat (the menu I saw included a sausage & bean hotpot) vegetables are the stars. And with a choice of cauliflower & chickpea curry, roasted vegetables, homemade hummus and a delicious looking vegetarian quiche and selection of salads on offer, who is arguing? 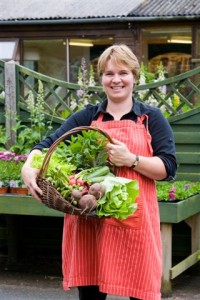 So, with wonderful bread made by Tony Wetherall, cake classics such as coffee & walnut, lemon drizzle and Victoria sponge, good coffee and tea, local juices and much more, there really is something for everyone. Customers are currently being invited to make suggestions for the children’s menu that is being developed. The team are just brimming with new ideas. A craft group on a Tuesday morning invites people to bring along any project they are working on, have a cup of coffee and enjoy the company while you are being creative. More special events along the lines of the ‘make an Easter bunny finger puppet’ held in March are also planned. Cooking demonstrations – already happening over at Rushwick – are being devised; starting perhaps with some ‘how to’ basic cooking techniques. I liked the sound of their ‘Foodie Nights’ too – three or four course meals with a theme, such as the Apple Evening held last autumn with apples in every course.

And I haven’t even mentioned the shop! A good selection of local produce; fresh fruit and veg, chickens from Rushwick, Just Rachel’s ice cream – I could go on and on! Such a lot happening, and all served with such enthusiasm and passion for what they are doing. Don’t take my word for it, go along and see for yourselves, you will not be disappointed.