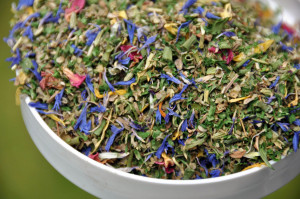 The Wright family just can’t stop having ideas!  It was son David who had the initial idea for their business, Wrights Culinary Delights, sparked by an interest in food and his travels to places like Morocco and Brittany.  Here he found markets with piles of jewel-like spices, and interesting mixtures of herbs and spices to rub on to meat, or flavour sauces.  Weary of life in front of a computer, David decided to take the plunge last November and, aided and abetted by his parents, Ian and Kate, he started selling their spices and salts at local markets.

What lured me into buying some of their products was the taste of the dip they were offering at the Malvern Farmers Market (tip for food sellers, greedy people like me cannot resist tasting your produce!) I tasted their Mexican Fiesta Dip, a nicely spicy combination mixed with natural yoghurt or cottage cheese – easy and delicious.  Then I noticed that they had a variety of salts, including sea salt with seaweed, something I had been looking for.  But on the way I saw a lime sea salt which smelt absolutely divine, perfect for fish, I thought, and an interesting one labelled “Bonfire”.  This turned out to be a smoked salt with charcoal added, similar to the Hawaiian black lava salt that you see in expensive delis.  These are ‘finishing salts’ that aim to add an extra taste dimension to your food. But what really grabbed my attention was a wild garlic salt that they have just started marketing, unlike many herb products it smelt fresh and vibrant – the next best thing to wild garlic itself! 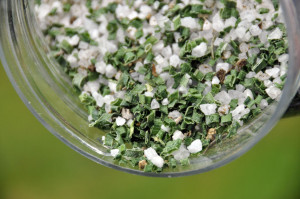 The ingredients for all of these are sourced from around the world, but the family do buy their fresh herbs from a grower in Pershore, and dry them themselves – which probably accounts for their freshness and vibrancy.  They also buy whole spices, not ground ones, and grind these as they use them – so none of that dustiness that you so often get with spices that have been hanging around for ages.  Ian Wright has also created his own smokery in the garden so that they can smoke their own ingredients to just how they want them.  Apparently the smoked black peppercorns are the perfect addition to fresh asparagus and butter!

But the ideas keep coming.  When I visited them at  their ‘spicery’ in Colwall I saw yet more new products, including a oak smoked salt that looked like demerara sugar and had a sweet, almost molasses aroma – watch out for that one!  Inspired by trips to the USA the Wrights have developed some rubs which would complement the great meat we have around here: Smoked Hereford Apple and Worcester Spicy Cherry.  And, hot off the press, they are now thinking about some barbecue chips with spices such as cinnamon or star anise in them that, when you cook over them, impart a subtle flavour to whatever you are cooking. Perfect for when summer finally arrives.

David is currently selling the products at a variety of farmers markets, see the list below, but you can also buy them at Handleys in Ledbury. Selling like this means they get to talk directly with their customers, allowing them to get a handle on which products people are coming back for and making it easier to judge their next step.They have recently started speaking to local chefs, so expect to see their products on restaurant & café tables or menus soon!   Stepping up production and deciding on packaging and branding could be the next move, but they are not in a hurry, preferring to allow the business to grow organically and not to over-reach itself.  Whatever their next step is, it seems that this family team will never run out of ideas and that many of them are likely to be delicious!