My partner and I are both in that post Christmas state of needing to shed some pounds so meals have been simpler and plainer recently than they otherwise might be. One evening I cooked a meal of baked white fish with leek and potato mash and sprouts.

“This is very tasty” he said “but it looks very bland – all white and pale green.”

(He likes to live dangerously).

I took his comment as a challenge and the following Saturday evening I served up a rainbow.

We started with a salad of red tomatoes and red peppers with a pomegranate dressing.

The main course was a spicy curry with cubes of orange-fleshed squash and yellow sweetcorn kernels. This was served with rice and steamed dark green curly kale. The vegetables all came from Handley Organics or from Abby’s stall just outside except for the sweetcorn which came from a tin!

For dessert I bought some blueberries. Grown in Chile, they were not exactly locally sourced, but they were organic. I kept back a few and lightly cooked the rest then stirred them into some gelatine dissolved in hot water along with some blackcurrant jam (which was the nearest to indigo that I could find) bought at The Shop at Bromsberrow. When the jelly had almost set I whisked it up into a mousse, poured it into some fancy glasses and topped it with low fat crème fraiche. Decorated with the remaining blueberries and served with a sponge finger it made a lovely, light dessert.

And the final colour of the rainbow? That was provided by a violet crème chocolate topped with a crystallized violet from The Velvet Bean.

A meal that was delicious, not fattening, in the majority locally sourced, and definitely not bland in colour! 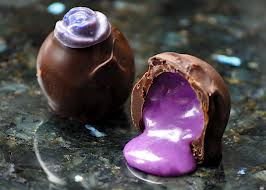