A chance encounter with a French couple in Italy last year, combined with a special offer from Brittany Ferries lead us to a recent holiday in La Brenne, in France. Known as ‘the land of a thousand lakes’ it is a regional natural park with hundreds of mostly man-made lakes, originally dug by monks for fish production in the thirteenth and fourteenth centuries. Some of the lakes are still used commercially for fish-farming; others have been developed for leisure use; others are left for wildlife. We were struck not just by the diversity of the wildlife but by the scenery and the countryside: meadows smothered in buttercups, ox-eye daisies and ragged-robin; lush fields grazed by the local cattle; hedgerows thick with may and dog rose; dense oak woodlands.

Our first stop was in a small town about the size of Weobley. The town had a bar, hotel, bakery, butcher (with fresh meat and charcuterie), a grocer akin to a Spar which also stocked fresh fruit, vegetables and local cheeses, a bank, insurance office, tourist office and a hardware store. We dined in a restaurant run by a local farm-producer, on his farm on the edge of the town, in a beautifully converted farm building. Once a week there was a market which combined stalls with local farm-producers selling meat, cheese, honey, vegetables, bread, wine, with more commercial stalls selling clothes, shoes and wool: about thirty stalls in total: All this in a town of just over one thousand inhabitants.

At one place we stayed, our host explained that he was offering ‘table d’hote’, therefore we dined together. Our host had moved from Touraine, an intensive wine-growing area, because of the excessive use of pesticides on the vines. He was passionate about the environment and so the non-intensive, mostly organic farming of La Brenne appealed to him. He explained that the park authorities worked closely with local farmers and tourist providers. The Park rents out land to farmers, who graze their cattle, sheep and pigs outside on the species-diverse meadows. In return the meadows are maintained for wildlife without the need for mechanical mowing. The pork that he served for the main course of our evening meal was testament to just how good the resultant meat was. I learnt a new word ‘réseau’ meaning ‘network’ as our host talked about the producers with whom he, and many other restaurateurs, work. 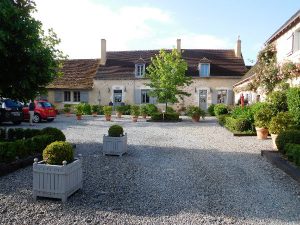 The park’s website states that it ‘evolved out of the desire to protect the area’s natural and cultural heritage and its creation has helped to develop the local economy together with the natural habitat.’ The park promotes not just wildlife and local producers, but the heritage of the area as well – the Park’s visitor centre and offices were in imaginatively converted redundant farm buildings, and tourism is preserving many other old buildings as they are renovated for accommodation. The fish-farming is carried out in the way that is has been for centuries.

We went on holiday to go birdwatching. What we found was a region where local links between all parts of the community result in huge benefits for wildlife and people alike.

Rachel Hicks is a former committee member of the Ledbury Food Group and was the original owner and creator of Just Rachel Ice Creams.