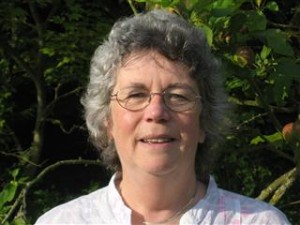 Congratulations to Jackie Denman, the founder and driving force behind the Herefordshire ‘Big Apple’ festivals, who has been awarded a Gold Medal for a Lifetime Contribution to the Cider Industry by the Royal Bath and West Show.

Jackie, who started the Big Apple in the village of Putley in 1989, received her award from Bath and West Chief Executive, Rupert Cox, in the Orchards and Cider Pavilion on the first day of the Show.

“I am not sure whether I am more pleased or more surprised”, said a delighted Jackie. “But I like to think that this is recognition not just of my efforts over the years, but of the whole team of people, including the apple growers and cider-makers of our corner of Herefordshire, who have made the Big Apple what it is.” 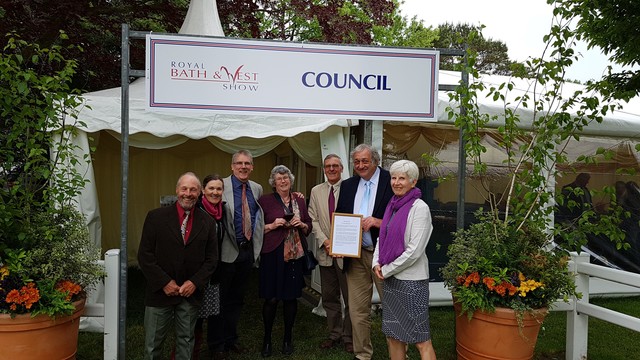 Royal Bath and West’s Orchards and Cider Chief Steward, Bob Chaplin, paid tribute to Jackie’s efforts, which he said had been “very influential in stimulating and encouraging new young producers to set up and engage with their peers and the public”. The Big Apple has also played a fundamental role in getting the wider local community behind their fruit-based heritage.

We in Ledbury Food Group are very grateful for the continuing role that Jackie plays, not least as a Food Group Committee Member, in championing the local food economy including our very special local apple and cider production.

Jackie played a key role in the production of our exhibition “A Fruit Farming Year – Nature and Nurture” which is on show until this Saturday (9th June) at the Masters House (Ledbury Library) – capturing though the seasons a year in the life of a local commercial fruit farm.