This interview was first published on November 20, 2012.

Update on 28/11/2012: Once Upon a Tree are the winners in the Drinks category of the BBC4 Food and Farming Awards. Congratulations to Ann & Norman, Simon & Hannah!

The Ledbury Food Group sets out to discover more about the people that produce our rich, abundant local food and drink. I talked to Ann Stanier of award winning Ledbury cider and apple juice producer Once Upon a Tree at Dragon Orchard about the development of this successful business. 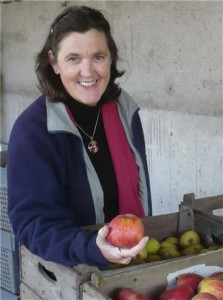 What is the background to your business?

Dragon Orchard has been owned by my husband Norman’s family for 80 years. It is a small fruit farm of 22 acres and supplied fruit to traditional local wholesalers, markets and food and cider processors. Norman and I returned to live in Herefordshire 20 years ago, after careers elsewhere, to learn fruit farming and take on the family business. It was a time of change. Traditional markets were disappearing and we soon realised that the farm would not be sufficient to keep us.

What did you do faced with such difficulties?

We realised that our best asset was the orchard itself, and we put great emphasis on maintaining its traditional character in our husbandry and our planting. We explored organic options, but decided that our orchard would benefit best from the minimum intervention regime that had always been practiced.

Our first development was our Cropsharers’ scheme. We saw this as a way to re-establish traditional links between producers and consumers. For an annual subscription, Cropsharers receive a generous share of the produce of our orchard. They also enjoy four weekend visits to the orchard at different seasons for orchard walks, visits to local producers and craft workers, communal meals, and seasonal events such as wassailing.

Then, when we needed to replant part of the orchard, we launched a “sponsor a tree” scheme. We found out later that we were early adopters of Community Supported Agriculture.

How has your business developed more recently?

Six years ago, wine maker Simon Day who grew up at the local Three Choirs Vineyard, was back in the area with the idea of applying wine making techniques to traditional cider production, and looking for orchard fruit in Putley. He was attracted to our traditional style orchard and fruit varieties and approached us with a proposal to make cider with our own cider apples. Once Upon a Tree cider production was born.

In the first year of production we won three first prizes for our cider and at Christmas that year we opened the Once Upon a Tree farm shop at the orchard. We now also make perry using locally grown perry pears and our shop is open from March to Christmas annually selling fruit juices, cider and perry, biscuits and cakes, farm-produced preserves, gifts, hampers and local crafts.

What makes your cider special?

It is ‘wine-style’ cider – the apple varieties are kept separate during fermentation and are blended later to obtain a consistency of flavour from one year to the next in our popular blends such as Putley Gold and Marcle Ridge. We do also produce single variety ciders, e.g. Dabinett and even an oaked cider made with Michelin apples.

What does the future hold?

Well we have just opened our second shop, which we have called Three Counties Cider, in Ledbury High Street selling cider and perry from other producers in the area as well as our own, along with local foodie delights and hampers. And this year we are finalists in the drinks category of Radio 4’s Food and Farming awards and are eagerly awaiting the results at the BBC’s Good Food Show at the Birmingham NEC on 28th November. On top of all that, Simon has been investing in our production facilities and we hope to have some new products in the future.

When I visited, apples were being crushed at the orchard press. The bagged up pomace – the solid remains – gets recycled to local pig farmers at Noggin Farm and Alumhurst Farm. Alongside I was surprised to see debris from recent grape juice extraction. In the barn were some plastic wine storage tanks. They had been recently acquired from Three Choirs Vineyard 5 miles away who have converted to use only stainless steel. Next to those were some smaller stainless steel tanks. These came from another local vineyard, Coddington, whose owners have recently retired and sold up.

Whatever happens next at Once Upon a Tree it is sure to be exciting.

Web site: Once Upon a Tree